What are micro-stops, and how are they detected?

Micro-stops are minor stoppage losses that occur when a machine stops for a short time as a result of a temporary problem. As soon as someone such as an operator resolves the problem, the machine quickly returns to normal operation. When a minor stoppage can be dealt with quickly, i.e., as soon as it is noticed, it is often considered a “micro-stop”. Since micro-stops can still interrupt workflow and temporarily cease the production of material, they may be categorized as downtime. However, in some cases, and in accordance with OEE standards, it may be more accurate to represent an “expected” amount of micro-stops as Uptime with a reduction in average speed over the time period measured.  In the remote monitoring platform, to do this on a specific machine, the Minimum Production Speed is set to a value greater than 1 unit rate of production.

Monitoring the Instantaneous Speed of the machine alone can produce inaccurate results depending on the exact time of data sampling.  If, over the course of a sampling interval (i.e. a minute), the Instantaneous Speed is sampled and found to be zero, then an assumption could easily be made that the machine was stopped over the entire sampling interval.  However, this may not be the case because the machine may have actually been stopped for only a few seconds. It is not helpful to accumulate large numbers of “false stops” in these cases as each stop would result in a downtime event being created.

To detect and eliminate the creation of false stops, the Average Speed of the machine is examined over the period of time that is being measured.  If the number of units produced during the sampling interval remains above the Minimum Production Speed, then the determination is made that the machine did not stop and no downtime event is created.  This method is described in more detail as follows.

Consider the diagram below: 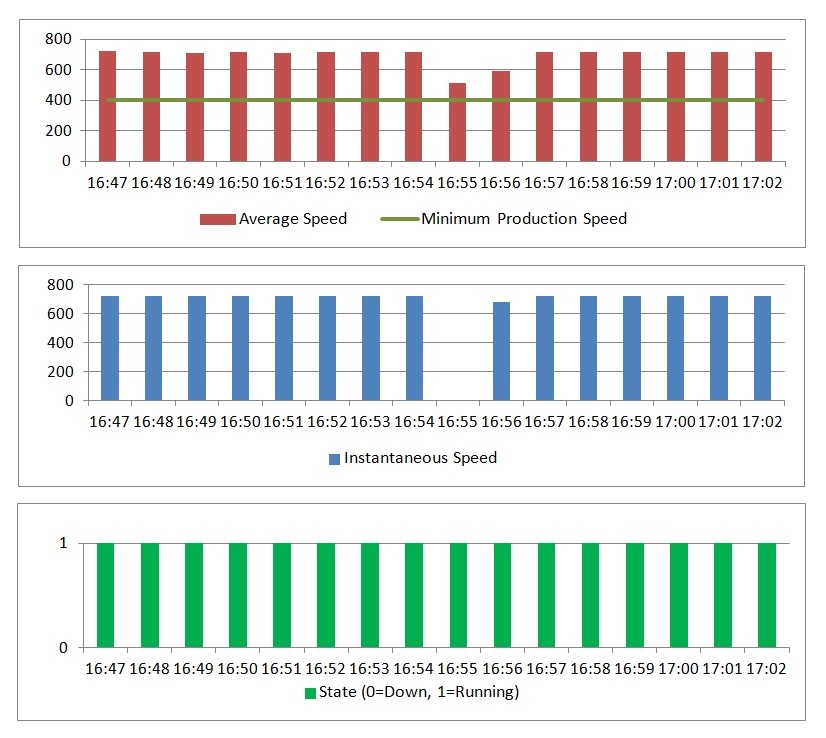 This example shows how the occurrence of the Micro Stop did not affect the reported state of the machine, but it did appropriately reduce the average speed reported.